The trial of Comrade Bala

The trial of Aravindan Balakrishnan, 75, is on-going in London. Also known as Comrade Bala, he was a former Singaporean communist that is being accused of rape, indecent assault and even imprisoning his own daughter for 30 years. He is said to use the ideas of communist revolution to convince his victims that what they were doing was for the eventual removal of the evil fascist western domination.

Comarde Bala was stripped of Singapore citizenship in 1977 because of his Communist/Marxist/Maoist beliefs and activities. He is known to be close to fellow Singapore communists such as G Raman and Tan Wah Piow, who also sought refuge in London after being wanted by the authorities for his activities with the Malayan communists in the 1970s. 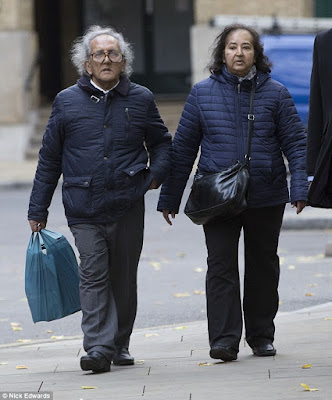 Aravindan Balakrishnan, 75, known as Comrade Bala, founded his own radical sect known as the ‘Worker’s Institute’ in Brixton, south London in the late 1970s.

He is accused of forcing two of his followers to regularly perform degrading sex acts and subjecting them to vicious beatings.

The communist leader also kept his own daughter captive from her birth in 1983 until she managed to escape the cult in 2013 aged 30, it is claimed.

Today, the woman told the jury how Balakrishnan had treated the women 'like animals' and that he had 'taken over her mind'.

But she said she never told Balakrishnan to stop the abuse because she thought the treatment meant she was 'being taken up a level in the revolution'.

'I felt I was being taken up a level in the revolution,' she told the jury. 'Although one didn't like it, it was almost like something that one had to go through.

'You couldn't rebel. It was seen as part of your training, as part of being a revolutionary soldier.'

She added: 'I thought it was a special relationship that might get me off of some of the criticism.'

She also described how she was given a time slot to go into his bedroom where she would perform degrading sex acts upon him as he sat on the sofa.

Prosecutor Rosina Cottage QC said Comrade Bala told his daughter to tell him straight away if she ever dreamt about someone else.

But when she confessed her feelings towards the left-wing Labour politician, her father said she was 'getting flu because she was being unfaithful' and that Jackie was preparing to execute her.

'He said that she was getting flu because she was being unfaithful to him, the centre of the world.'

In another incident, Balakrishnan beat his daughter, and no windows in the house were opened for three years after she had a sexual affair with a neighbour, it is alleged.

In August 2005 the commune moved to a property on the Angel estate in Brixton, south London, when she developed feelings for a neighbour, Marius Feneck, who she called her 'angel', the court heard.

Ms Cottage told the court: 'She developed a consuming passion for him. She wrote him a poem calling him her angel. She started to find opportunities to try to talk to him.'

She sent him photos she had secretly taken of herself and then wrote to him, inviting him to come to her house, jurors heard.

He sneaked in by climbing through her window and the pair had secret trysts, the court was told.

But on one occasion, when he took his cousin over to hers for group sex, they were discovered because his mobile phone rang.

Balakrishnan rushed in and beat his daughter, threatened to 'burn her on the spot' and have her committed to a mental hospital, it is claimed.

Ms Cottage said: 'It was as though she had betrayed a husband.'

She said: 'By the time she left, aged 30, she'd never been to school or other educational establishment, had never played outside as a child or gone out with friends as a teenager or an adult, she had never had a bank or other account, had no national insurance number, she had never had her own key.

'Apart from being registered at birth and with a GP at birth - which lapsed due to returned mail, she was not registered anywhere. Not known to anyone.

Read more of the trial:

http://www.dailymail.co.uk/news/article-3320681/Maoist-cult-leader-groomed-raped-follower-forcing-explicit-sex-diary-shared-acolytes.html
Posted by Kampong Academic at 19:35