Who is Tan Wah Piow? "I will not go around shopping for justice in Singapore."

Tan Wah Piow, the man charged by the government to be behind the 1987 Marxist plot is rather distant from our everyday memories. Who or what do we know him as? A violent communist? A freedom fighter? An exiled activist? A draft dodger? It is no miracle that our impression of him is blurry. History taught at the O and A levels stopped in the immediate post-independence period. Very kosher indeed. Even the history of the tumultuous 70s and 80s are taught in shallow breath rather than in depth at local universities. Each day, as we procrastinate the exploration of our past, we are doing injustice to the deeds and decisions we come to today.

The prominence of Tan Wah Piow or TWP came to light in the heady 70s when he was an active student activist in National University of Singapore. Influenced by leftist and neo-colonialists movements, TWP's involvement in the student union and various other socio-political causes earned him an eager following and like-minded friends. They saw the inequalities that descended on Singapore as economic booms and dooms set itself upon the global trade economy that Singapore was plugging into. Conditions were definitely not as comfortable as today and there were many grievances as well as improvements to be made. However, not so much as the causes he advocated, his methods of confrontation and disruption perhaps meant that he was on a collision path with the government. 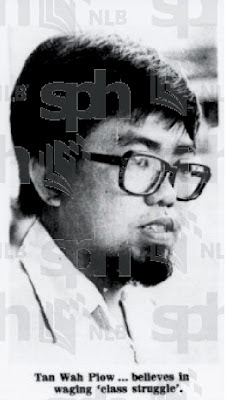 In Febuary 1975, TWP was sentenced to one year imprisonment for rioting in the Pioneer Industries Employee Union (PIEU) incident where an industrial dispute led to the PIEU office being smashed up. On 30 October 1974, a planned meeting between PIEU and TWP, workers from the American Marine company and students erupted into a riot. TWP countered that the Sec-Gen of PIEU was nowhere to be found at the stipulated meeting and that PIEU union officers had themselves smashed up their own premises. While TWP claimed that a Straits Times reporter saw him outside during the incident, various eye witnesses during the trial thought otherwise.

On his conviction, TWP daringly said to the judge in court, "I congratulate you on your future promotion to the High Court..." After the judge warned him of being contemptuous, TWP continued: "I do not have to bargain justice with you. I will not go around shopping for justice in Singapore. I want justice now. There is no rule of law in Singapore. You can imprison my body, but not my spirit."

Daring words indeed from someone who perhaps have no fear of authority.

On his release from prison, TWP was drafted to serve National Service. Perhaps he was due to serve, perhaps government was trying to keep away the troublemaker. However, TWP made the decision to dodge the draft and escape to the UK. TWP, for better or worse, decided that NS was too dangerous for him and that the government would "assassinate" him or cause an accident such that he would be silenced forever. “I too was worried for my physical well-being since ‘accidents’ can easily happen in the army,” he says. See here for a more detailed TOC article.

According to official reports, TWP sought help from pro-communists elements of the Southeast Asia Research Services (Sears) which helped him enter Malaysia illegally by sea. Sears was formed in 1973 to promote Marxism among intellectuals, students and workers. He hid in Malaysia for a month before securing his passage to the UK, via Thailand and Amsterdam, on a passport with a forged exit permit. Three members of Sears who helped TWP later sneaked out of Singapore joined the Communist Party of Malaya.

“When I came to the United Kingdom to seek political asylum, I enjoyed the support of the World Council of Churches, and the British Council of Churches,” says TWP. “Many other organizations and prominent individuals from all over the world supported my case.” But most importantly, TWP got a place in Bradford University and a student visa through the contacts of Malcolm Gladwell. TWP was hence later able to legitimise his stay in UK where he resides today.


Endnote: In 1978, few years after he had helped TWP, Cladwell was mysteriously killed in Cambodia when he was there on the invitation of Communist Khmer Rouge. In 1966, he was invited to raised funds to buy funds for the Vietcong. He was a 'far-left' member of the British Labour and a sympathiser to liberation struggles in Southeast Asia. He was said to be involved in the Euro-Communist plot in the 1970s to exert pressure on Singapore government to relase communist detainees.
Posted by Kampong Academic at 20:41