A Second Glance: United Front Were No Communists


Last week, Singapore alternative online news outlet The Online Citizen published an article titled United Front were no communists: British intelligence. In gist, the article revealed the contents of a British classified document illustrating Maurice LB Williams, the Security Liaison Officer (title of the Head of the British intelligence unit, MI5 office in Singapore), evaluating the evidence presented by the Singapore Special Branch on the security situation in Singapore in 1962.

In his report, Maurice LB Williams evaluated that the United Front was not being dictated to or controlled by the communists and this ran counter to the PAP government’s claim that the opposition was involved in a communist conspiracy to topple the government. Maurice also mentioned that "they are united only in their dissatisfactions with the P.A.P. Government, and they cannot be considered to form a monolithic Communist edifice under strict Party management ".

This is no doubt an interesting perspective that would spur readers to delve further into this topic and inject much needed academic vigour and vibrancy into this phase of Singapore's history. It is strange though for a MI5 officer to expect a "monolithic Communist edifice under strict Party management" as a smoking gun when these trade unions, as well as peasant and student organisations were simply proxies of the CPM. Did Maurice honestly expect the CPM to officially subsume the United Front and legitimize police action against them? Maurice's assessment is all the more confounding when Chin Peng himself admitted that "most of the island's workers sympathized with the left-wing trade unions and members of these unions well appreciated they were under the control of the CPM".

CPM's control of the United Front is further supported by the memoirs of high ranking CPM cadre Fong Chong Pik (aka The Plen) when he admitted to having a special acquaintance with Lim Chin Siong, the top United Front leader in Singapore. 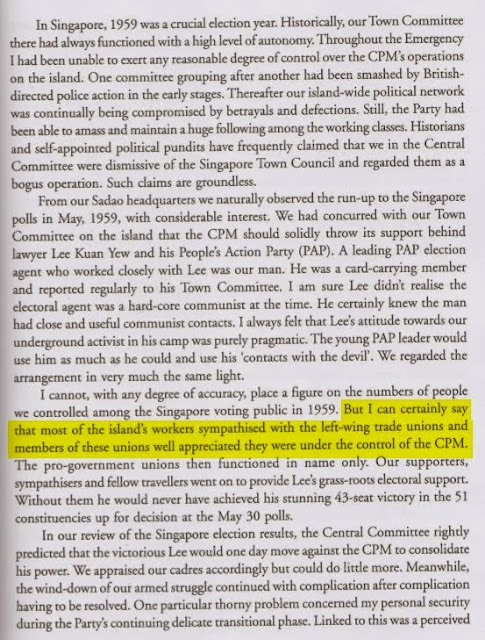 However, like in all historical academic writing, one should be cognizant of the need to present evidence from multiple sources rather than depend on only those that fits one's assertion. As the Security Liaison Officer in Singapore, Maurice must have sent more than one report back to the Colonial Office and it would be beneficial to review all his reports for a complete view on Singapore's then security situation rather than cast judgment based on a singular report.

Moreover, the launching of Operation Coldstore was ordered by the Internal Security Council comprising of governmental representatives from the United Kingdom and the Federation of Malaya and Singapore. Any decision taken by the council must be approved by the majority of council members and in the case of Coldstore the decision was unanimous. Hence, Maurice's single assessment may not represent the final assessment made by the British government.

Having said these, I like to introduce a few more interesting excerpts from CPM leader Chin Peng's autobiography My Side Of History which unexpectedly contradicts MI5's assessment. 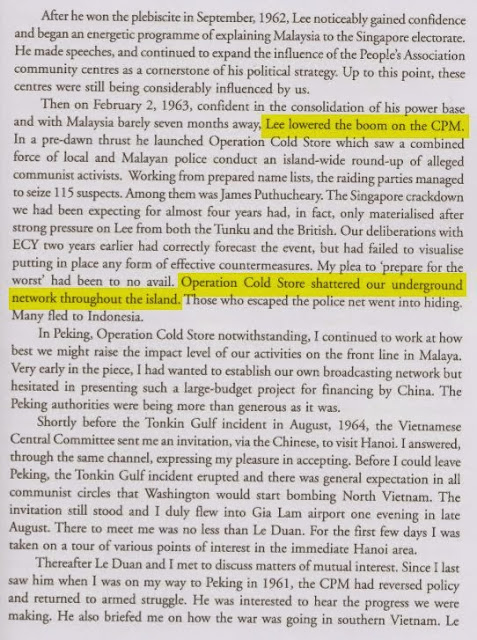 In spite of Chin Peng's acknowledgement for Operation Coldstore, he categorically denied having any direct control over the Barisan Socialis. Chin Peng also refuted allegations that politicians like Dr Lee Siew Choh nor other prominent figures like the Puthucheary brothers had ever been CPM members. He did however admit to influencing these politicians. 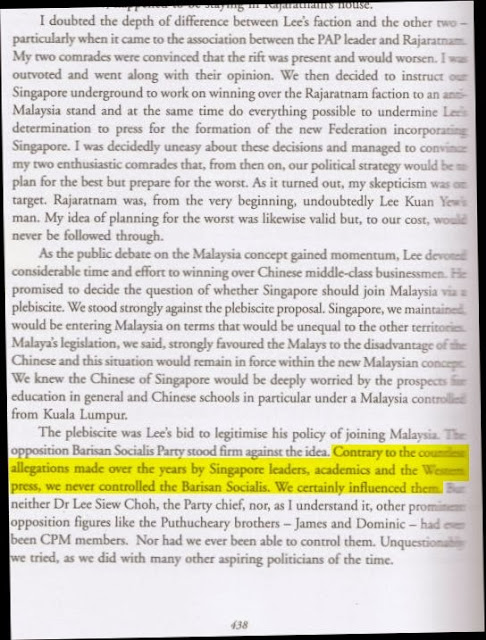 Note: Dr Lee Siew Choh, Party Chief of Barisan Socialis was never arrested under the ISA
This is where the play with semantics occur. When can one be considered a Communist or not a Communist? Can someone qualify to be a Communist if one is inclined to the ideology or does one have to be a card-carrying member? This is a question for readers to ruminate on and arrive at their own conclusions.

To conclude, rather than give clarity to this tumultuous period of Singapore history, TOC's article raises more doubts than answers. Hence, it is up to all like-minded history buffs to sieve through the numerous resources available and hopefully piece together a balance and credible narrative for all Singaporeans.